In the spirit of potentially finding some room on your roster, let’s cull the list of players to those with at least 12 minutes of ice time per game and six games played, then look at which players are rostered in at least 20 percent of ESPN leagues and doing nothing for you.

For a baseline to compare to, the worst player for fantasy points per 60 minutes (FPP60) with the minimal game thresholds listed above is Calle Jarnkrok of the Seattle Kraken. In 118 minutes of total ice time, he’s posted one blocked shot, three hits and nine shots for a total of 0.86 FPP60. Of course, Jarnkrok isn’t rostered in 20 percent of ESPN leagues, so we need not take the time to examine him further. But his 0.86 FPP60 is a reference point for the players listed below.

Cole Caufield, W, Montreal Canadiens (1.39 FPP60): Still rostered in 40 percent of ESPN leagues, we are definitely in a place where you can cut Caufield loose. He’s played two games in the AHL since being sent down and has posted one assist and a minus-4 rating. Perhaps this conversation would be different if it were just about Caufield finding his groove, but it’s also about the Habs offense finding some consistency too. With both factors needed to give him fantasy legs, go ahead and drop him.

Max Comtois, W, Anaheim Ducks (2.04 FPP60): I mean, this is more about just poor prognostication about which Ducks would click this season by the fantasy hive mind — yours truly included. The preseason faves were Comtois, Jamie Drysdale and Trevor Zegras, but in reality it’s Troy Terry, Kevin Shattenkirk and Adam Henrique popping off. We’ll take it, but Comtois is still rostered in 55 percent of leagues despite his futility with opportunity. Drop him.

Jeff Petry, D, Montreal Canadiens (2.58 FPP60): We come now to our first really tough call when it comes to how to handle the player. On one hand, Petry is still the best option the Habs have on the blue line on paper and was only recently pulled off the top power-play unit (but still getting secondary time). On the other hand, two assists and 13.5 total fantasy points in 314 minutes of ice time! He’s actually fourth in the NHL right now for total ice time. The reluctance can be seen in leagues too, where Petry is still rostered in 89 percent of them. I do agree with trying to hang on a little bit longer, but certainly on the bench.

Blake Wheeler, W, Winnipeg Jets (2.77 FPP60): Let’s chalk this one up to a COVID absence and new dynamic on the Jets offense. To be fair, Wheeler and Mark Scheifele have only played 55 minutes together at five-on-five this season, making Wheeler’s season thus far the equivalent of basically three games. Let’s call it a small sample size and forgive his low output. That said, he’s still Blake Wheeler and might be worth flipping a trade offer toward in your league.

Tomas Tatar, W, New Jersey Devils (2.80 FPP60): Still rostered in 33 percent of ESPN leagues, this must be fantasy managers smitten with what Jack Hughes did in two games and waiting for December to come. But it’s worth noting that Tatar didn’t even play with Hughes for more than a shift before the young star separated his shoulder. There was preseason hope that Tatar would be a part of the Devils attack, but it’s not happening. Let him go.

Jack Roslovic, C, Columbus Blue Jackets (2.83 FPP60): Riding a wave from potting two assists in the season opener, Roslovic is still rostered in 53 percent of leagues despite doing next to nothing since then. He’s found himself on the third line lately, and that’s with Patrik Laine (gone for four to six weeks) out of the lineup too. Early impressions aside, it’s safe to put Roslovic back in the free agent pool.

Jakob Chychrun, D, Arizona Coyotes (2.87 FPP60): This one hurts after Chychrun emerged as such a powerhouse last season. He was second in the NHL among defensemen last season with 6.14 FPP60, so this is a significant fall from grace. Two factors at play here: Shayne Gostisbehere has stolen the PP duties as a specialist and the Coyotes, well, kind of stink. It’s going to take more than 12 games for me to cut bait, but consider Chychrun on notice.

Forwards on the move

Alex DeBrincat, W, Chicago Blackhawks (down one spot to No. 52): No further slide from DeBrincat this week as his life on the third line appears over with a coaching change. He was back with Patrick Kane on Sunday, playing 21 minutes and scoring as the Hawks won. Assuming new coach Derek King keeps him with Kane, things should pick up from here.

Blackhawks get the 2-1 overtime win after Alex DeBrincat scores the game winner in transition.

Nicklas Backstrom, C, Washington Capitals (up 26 spots to No. 106): It’s tough to assess what to expect now that Backstrom is edging closer to a return from a hip injury. He’s eligible to come off the injured reserve now, but will probably be another week or two. The question is what do the Caps do with him? Alex Ovechkin, Evgeny Kuznetsov and Tom Wilson are the best line in the NHL right now (72 shots and 13 goals both lead the NHL at even strength). Anthony Mantha and T.J. Oshie are sidelined, and they are likely Backstrom’s line mates when they are all healthy, as breaking up the top trio just doesn’t make sense. I think that does lower the overall expectations for Backstrom, though he should still get a piece of the power-play pie.

Defensemen on the move

Quinn Hughes, D, Vancouver Canucks (up four spots to No. 112): The Canucks power play came alive on Sunday, with Hughes picking up a much needed three assists, all on the advantage. His FPP60 is still hurting (4.64), but his fantasy points per game are just fine thanks to big minutes (2.0). If the power play has found its stroke, expect a quick rise from Hughes, as he’s done a great job of maintaining decent value during the slump.

Ryan Pulock, D, New York Islanders (up 12 spots to No. 132): Pulock has slowly pushed back to more of a 40-60 share of the power play duties with Noah Dobson, with the younger Dobson still earning the lion’s share. That said, Pulock doesn’t need a ton of minutes there thanks to a terrific blocked shots and hits baseline. If he can keep pushing for a little more on the advantage, Pulock should get close to the top-20 defensemen projection he came into the season with.

Goaltenders on the move

Ilya Sorokin, G, New York Islanders (up 11 spots to No. 21): Semyon Varlamov finally made his season debut on Sunday, and it did not go well. He allowed three goals in a loss. Varlamov needed a big statement to wrestle back a split of duties, so this should offer some protection for Sorokin to remain the 1A for the the short-term. With the numbers Sorokin has produced so far, it’s clear he’s a top-fve goaltender if given the requisite crease share.

Philipp Grubauer, G, Seattle Kraken (down 93 spots to No. 145): It takes a lot more than an experienced blue line and a capable netminder to create a defensively sound squad from thin air, apparently. After allowing five goals to the lowly Arizona Coyotes, I think we can call Grubauer a fantasy train wreck at this stage. He’s posted an .886 save percentage overall, which is bad enough, but his save percentage at even strength is also .886, ranking 60th out of 71 goalies to have appeared in a game this season (and also the lowest for any goaltender with at least 100 minutes and not on the Blackhawks). The defensive-minded Kraken holding their own was a lovely vision we all had before the season, but it is not to be.

Postgame analysis and highlight show airing each night throughout the season from Barry Melrose and Linda Cohn. Watch on ESPN+ 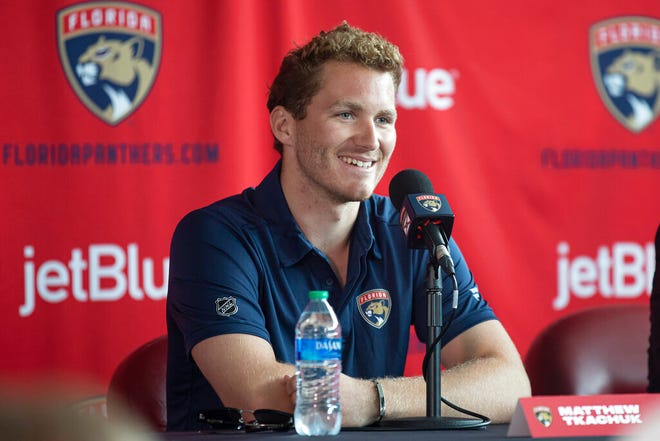